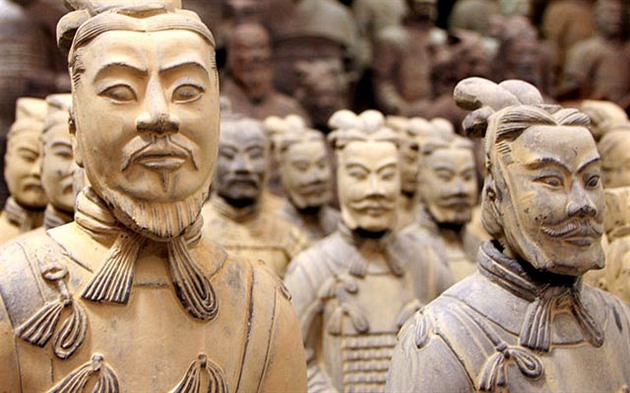 Visit to China’s First Emperor and The Terracotta Warriors Exhibition at Liverpool World Museum and the Victoria Art Gallery and Museum, 18 April 2018.

This fantastic exhibition is a landmark event as the figures on show have not been seen outside London for more than 30 years and 180 of the spectacular artefacts have never been seen in the UK before.

The exhibition tells the story of the rise to power of China’s first Emperor, Qin Shi Huang, and the legacy of his achievements in the succeeding Han Dynasty. The Emperor’s vast burial site was discovered by chance in 1974 when farmers were digging a well.

Over 2000 life size figures were revealed, whose task was to serve the Emperor in the afterlife.  We learnt about the burial project itself when 7000 men were employed to build a mausoleum surrounded by palaces, living quarters, office ritual buildings and stables, all enclosed within walls towers and gates.

The highlight of the exhibition was the impressive figures of a heavy infantry man, a light infantry man, a charioteer, a kneeling archer, a standing archer and a General.  Clothes, hairstyles and armour reflected their rank and the position of the hands suggested the weapon they held. Although all would have been painted only a few flakes of the original pigment may be seen.

In addition we were given opportunities to learn about the diversity, philosophy and beliefs of ancient China and to view a wonderful range of artefacts. A privilege!

The second half of the visit was to The Victoria Art Gallery and Museum, where we had lunch.  This beautiful ‘redbrick’ Grade 2 listed building was designed by Alfred Waterhouse in 1892. As a celebration of Liverpool’s year as European Capital of Culture in 2008, it had been carefully renovated.

We then enjoyed a guided tour, during which Amanda Draper, who until recently was the Art Development Officer of our Collection, showed us two paintings, a Richard  Ansdell entitled ‘Startled’ and ‘A Group of Alpacas’,  which could possibly also be by Ansdell.  We also saw a series of artworks by Raymond Watson celebrating twenty years of the Good Friday Agreement.

The top floor, the Tate Hall Museum, overlooked by a huge diagram of a Higgs Boson event, contains exhibits on a variety of subjects including zoology, archaeology, engineering. oceanography and a fascinating display of false teeth.  What tales they could tell!